Centre Ministries is an evangelical Christian charity which seeks to spread the good news of Jesus Christ primarily by providing a warm welcome and pursuing a shared vision with those groups using our conference centres.

We serve the Christian community but also welcome others, especially schools, who wish to enjoy our Christian ethos and environment. Each centre is different. What they have in common are beautiful settings, experienced helpful staff and a desire to combine excellence and cost effectiveness.

Churches, youth groups, students, Christian charities and schools all use our centres – people of all ages and all backgrounds. We offer flexible accommodation for small and large groups using our residential facilities, camping and marquees.

The residential experience is an enormously powerful tool in the life and growth of any group. Centre Ministries exists to make these great experiences possible. If your time away with us is not a blessing then we are missing our goal!

Our support network, ‘Friends of Centre Ministries’, is for people who would like to stay in touch with what’s happening on a regular basis. We need people alongside us praying for us. As a friend you will be able to commend our centres to others and help us make the connections that will develop our ministry so that it continues to be relevant and useful to the Christian community. Click on the link below to get the latest news from across the group. If you would like to be on our email list please contact us. 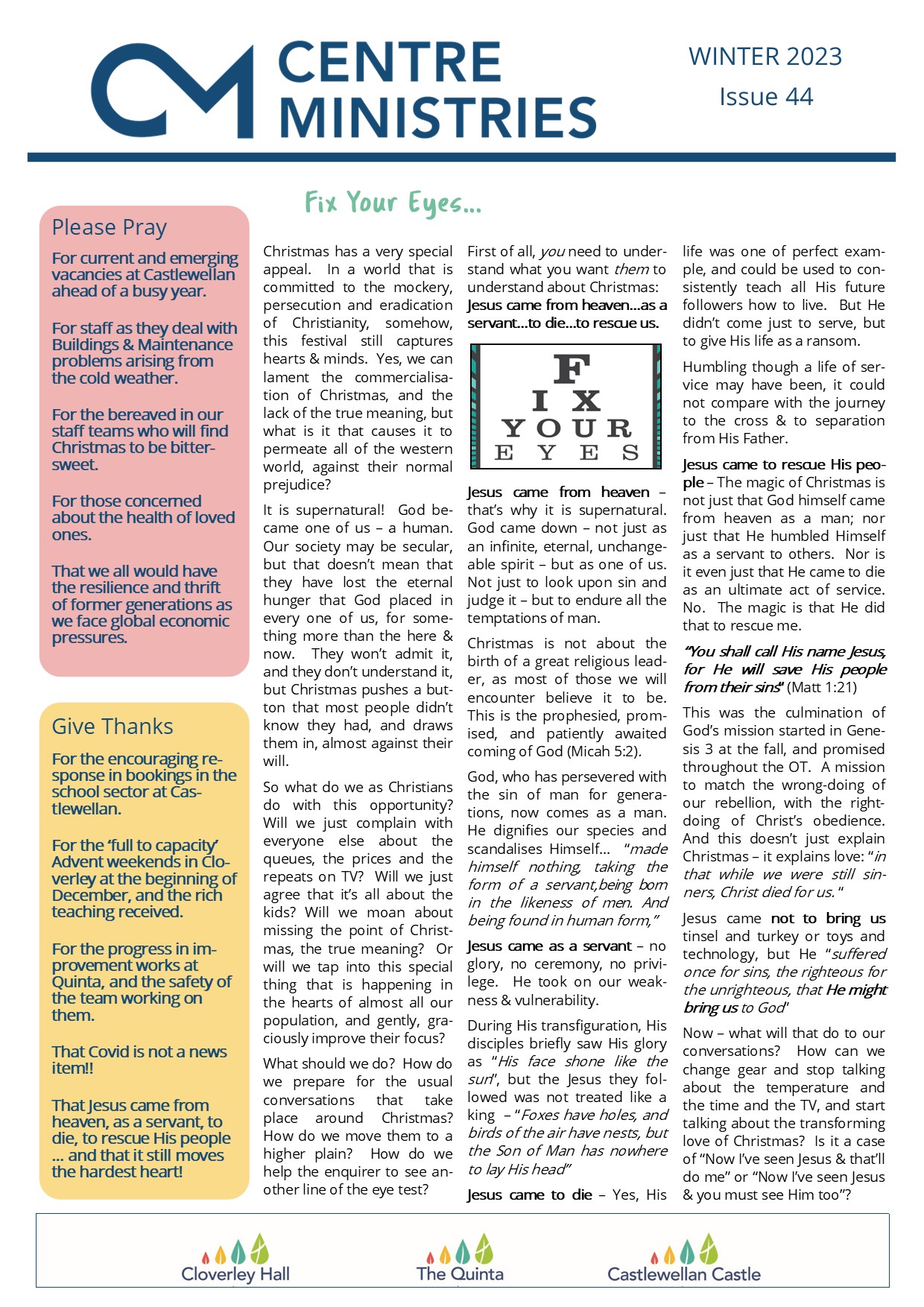 It is getting more difficult to provide residential centres that are really good whilst making sure that they remain financially accessible to folk on average or below average incomes. This is a continual struggle and it provides us with great challenges. We run occasional Volunteer Weeks at some of our centres and we are always on the lookout for individuals with expertise to give help elsewhere. If you would like to help us practically at any of the centres, please contact us.

The group office undertakes key central functions and exercises leadership and oversight on behalf of the Board. Notwithstanding this, the centres have their individual style and ministries. Our Chief Executive, Harry Baxter, spends his time between the three centres and his admin office in Northern Ireland.

Our registered office is at The Quinta.

Centre Ministries Board of Trustees

Our trustees give their services voluntarily. They come from a variety of different professional backgrounds to give their advice and support and to take responsibility for the governance of the charity:

Our conference centre work began more than half a century ago out of the provision of a residential training base for mission work in Ireland. In 1965 Ogston Hall, a private stately home in Derbyshire was offered to Irish Evangelistic Treks (IET) on a short, rent-free lease. They needed a base for their work in Southern Ireland as well as a training centre for Trek Team members prior to their summer evangelistic programmes. It was here that the first of numerous conference centres was set up.

Cloverley Hall itself became the Headquarters of IET back in 1968 as the lease on Ogston Hall was coming to an end. Cloverley Hall in Shropshire had been a Christian Boys school forced to close and the School Governors wanted the Trust’s property to remain in Christian hands. At an Extraordinary Meeting of the Governors, the Committee Members of IET became the Trustees of Cloverley Hall Ltd and so acquired the freehold and access rights across the surrounding Estate.

In 1974, the charity were granted a lease on Castlewellan Castle, in the Mournes area in Northern Ireland. The Castle had been the stately home of the Annesley family and had transferred, along with the Forest Park, to Forest Services. They had no use for the recently bombed building, so the trustees, supported by local volunteers, took on the huge task of turning it into a residential centre. The first groups were welcomed in 1976, but the centre has enjoyed fairly continual improvement and development over the intervening years.

The Quinta, also in Shropshire, joined the fold in 1985. It had operated in various guises over the years, always under the Price Trust, which required the property to be used for evangelical Christian purposes. When the then trustees were no longer able to do that, Centre Ministries took over the operation of the Trust and established a multi-unit residential centre on the site.

The charity has been involved with a number of other centres over the years. The name was changed to Centre Ministries in 2007 to better reflect the more diverse nature of our work.

The Quinta is owned by The Price Trust.  Centre Ministries is the corporate trustee of this trust which requires The Quinta to be used for Christian purposes.  It is a great joy to be able rent out, at cost, part of The Quinta to Operation Mobilisation for their UK HQ.  OM is a large international missionary training and relief organisation with staff of around 100 nationalities working in about 100 different countries. Find out more about this exciting work on their website.

Each of our centres takes student groups. This is especially true of the Quinta where Forum, the annual conference to prepare Christian Student leaders for the next academic year has been held for many years.  Centre Ministries works closely with the Christian students.

At The Castle, we are delighted to host the training weekend for leaders of all camps and missions held under the auspices of Scripture Union (NI), as well as hosting a number of their summer camps. We have enjoyed developing our relationship with S.U.

In each of our centres, but maybe especially at Cloverley, we have been able to accommodate numerous holidays organised by Christians Against Poverty.

Centre Ministries works with other organisations. Many English groups use the services of Christian out-door activity providers, Adventure Plus.

All our centres are members of CCI.  CCI promotes Christian residential work and has a membership that includes over 100 centres like ours and many organisations that run residential events and holidays.   It is run by a Board of trustees and an executive council mostly elected by the members. On its website venue enquiries can be made, jobs are advertised and there is access to all sorts of help for those wanting to take groups away.